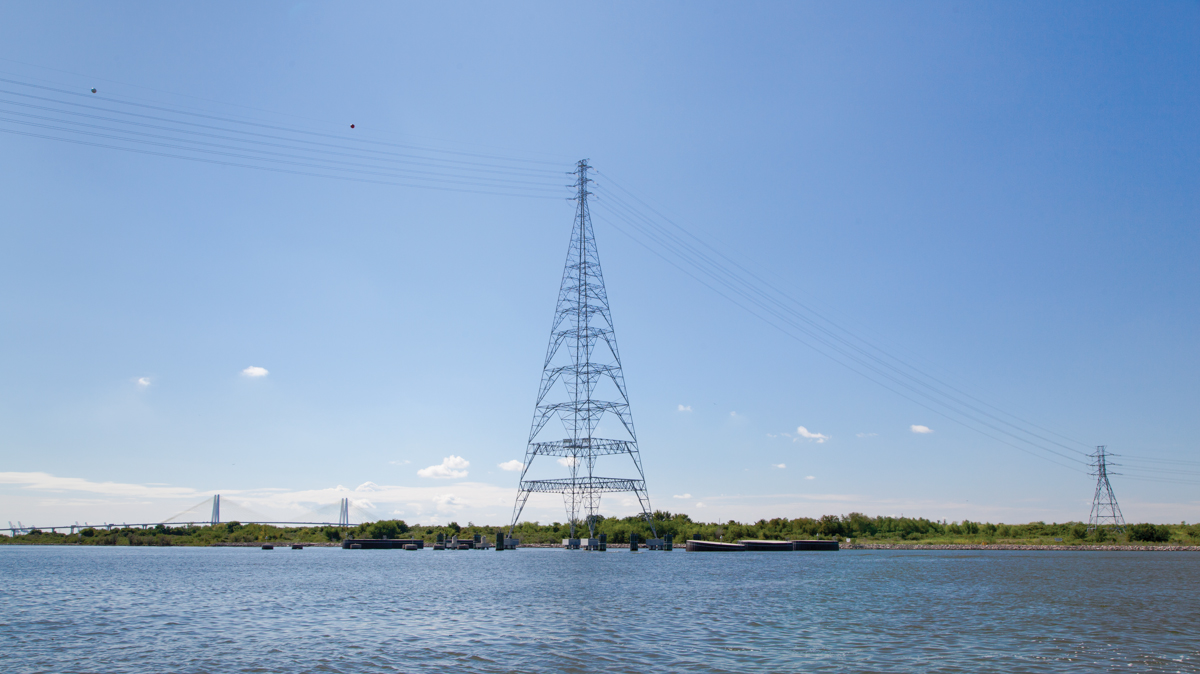 Sitting not far from Baytown, Texas and below the beautiful Fred Hartman Bridge, Alexander Island is a tropical place. But you won’t find it on any travel destination websites – the island serves as a way station for natural gas and oil pipelines, along with towering transmission lines that traverse the busy Houston Ship Channel.

By design, the island also serves as a depository for the dredging operations needed to keep the Ship Channel clear and the Port of Houston – among the nation’s busiest – humming along. Unfortunately, years of dredging have caused the towers carrying a 138kV transmission line to lean – in fact the cables themselves are essentially supporting the failing towers. In comes Mesa Line Services to take on this logistically challenging project. With the towers to be replaced, CenterPoint asks Mesa not only to move the lines’ path and build new towers (all the while avoiding the multiple pipelines buried below), but to reconductor to support the change to 138kV transmission.

It calls for a tightly-planned and highly coordinated precision process involving multiple subcontractors, the Port of Houston Authority, three separate pipeline companies, engineers and inspectors from CenterPoint, and of course, the Mesa team. A landing site is built underneath the Fred Hartman Bridge where barges are loaded, and everything needed for the project makes its way across the Ship Channel to Alexander Island. This includes massive cranes, front loaders and the hundreds of mats needed to build a “road” from the barge landing point around the periphery of the island that supports the equipment needed to build new towers, put new cable in place, and disassemble and remove the old towers and lines.

Meanwhile, the existing line from the mainland to the island is nearly 300 feet above the Ship Channel to allow the Port of Houston traffic to pass. That line, once separated from the failing towers, must be held securely in place while the first new tower is built. Mesa then uses equipment to carefully (can’t allow the line to fall in the Ship Channel!) maintain the tension on the line while moving it some 400 feet to its new home. Conducted in the heat of the summer months and dealing with extreme conditions along with the island’s native wildlife (and – at last count – approximately 8 billion mosquitoes), the Mesa team brings in the project ahead of schedule and under budget.